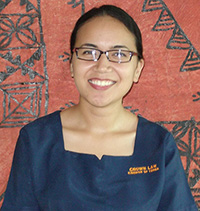 Ms. Rose Kautoke graduated with an LLB from the University of the South Pacific in 2010. While undergoing her PDLP programme she carried out her practical placement in the Crown Law Department in 2011. Ms. Kautoke  joined the Crown Law Department in August 2011 as a Legal Officer attache from the Ministry of Justice. She was laterally transferred  from the Ministry of Justice in 2012, and appointed Assistant Crown Counsel, a post which she presently holds. Ms. Kautoke was admitted as a Law Practitioner of the Supreme Court of Tonga in 2011.

Ms. Kautoke is currently working on consolidating Tonga’s laws for law revision. Her other duties involves legal research, preparing brief and indictments for criminal matters, preparing legal opinions, and also interviewing applicants for adoption and guardianship application and writing Guardian Ad Litem  reports for the Supreme Court. She has appeared in a numerous number of criminal cases for the Crown. Ms. Kautoke also assists in looking after the Executive Support Services Sector of the office.