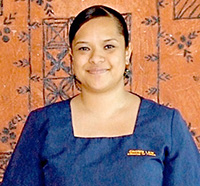 Ms. Leotrina Macomber graduated with an LLB from the University of the South Pacific in 2009. While undergoing her PDLPprogramme she carried out her practical placement in the Crown Law Department in 2010. In September 2010 she joined the Crown Law Department and was appointed Assistant Crown Counsel, a post which she presently holds. Ms. Macomber was admitted as a Law Practitioner to the Supreme Court of Tonga in 2010.

Ms. Macomber’s work currently involves legal research and preparing legal opinions, preparing briefs and indictments for criminal matters , and also interviewing applicants for adoption and guardianship application and writing guardian ad litem reports for the Supreme Court. She assists in looking after the the Economic Sector of the office. Ms. Macomber also appears in a numerous number of criminal matters for the Crown.