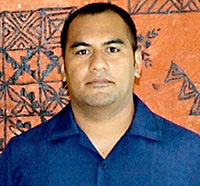 Mr. James Lutui first joined the Crown Law Department in 2002 as an Interpreter. He held this post for a number of years before leaving to study law at the University of the South Pacific. Mr. Lutui returned to Tonga in 2007, after having graduated with an LLB and having been admitted as a Barrister and Solicitor of the High Court of Fiji. Upon re-joining the Crown Law Department, Mr. Lutui was appointed to the post of Assistant Legal Officer , before being promoted to the position of Assistant Crown Counsel in 2008 and Crown Counsel in 2009. Mr. Lutui went on study leave in 2012, he re-joined Attorney General’s Office in 2013 after completing his Masters of Laws with first class honours in Public Law from the University of Auckland in 2012.

In 2020, Mr. James Lutui was appointed the Director of Public Prosecutions a role he currently holds.

Mr. Lutui is currently the Secretary of the Government Law Committee, a position that he has been holding since 2007. A large part of his work involves legislative drafting and overseeing the finalisation of bills and regulations to be considered by the Law Review Committee or Cabinet.  He is the head of Economic Sector legal team of the office. From September 2009 to May 2010, Mr. Lutui was appointed “Counsel Assisting” to the Royal Commission of Enquiry in the Sinking of the MV Princess Ashika. He has appeared in a numerous number of criminal and civil prosecutions for Crown.