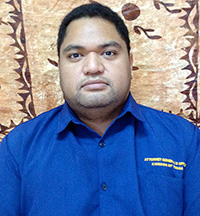 Mr. ‘Aho graduated with a Bachelor of Arts with a double major in History and Politics in 2009 from the University of Auckland. He temporarily joined the Crown Law Department as a Law Clerk under the Department’s internship program in 2010 for a few months before returning to complete his legal education. Mr. ‘Aho joined the Attorney General’s Office in July 2014 after graduating with his LLB from the University of Auckland and was appointed Assistant Crown Counsel, a post which he presently holds.